Beatriz: My experience working abroad during the Covid-19
Visit Cork: top things to do
Co-living in Dublin: the new accommodation sharing trend
How to create the perfect CV & Cover...
Planning your trip to New York
A Travel Guide to Ireland’s Alternative Activities
How Study Abroad in Spain Inspired My Wanderlust
4 Apps You’ll Need to Survive a Year...
Top 4 Culture Shocks in moving to France.
The Best Ice Cream Places to Visit in...
Home #AdventureThatIsLife Ryan’s Trip to Chicago: What to do in the Windy City
#AdventureThatIsLifeExperiencesExploreInternLive AbroadTipsWork

Ryan’s Trip to Chicago: What to do in the Windy City 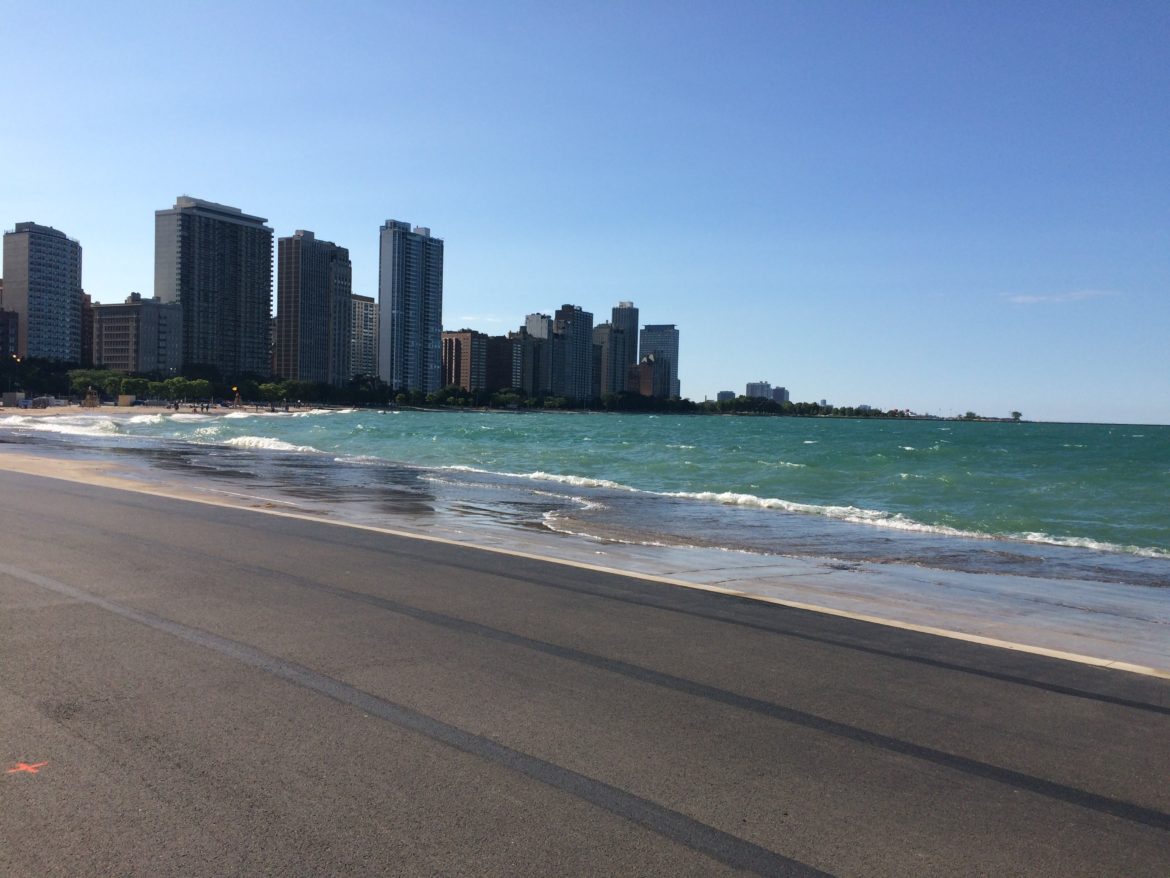 My maiden voyage to the American Midwest was a trip to Chicago, the most populous city in the region.

In recent years I had heard great things about Chicago, from relatives who had holidayed there and from friends who spent summers there. How my trip came about was actually pure luck.

So I spent the summer of 2015 in Cape Cod and, during my time there, two ladies from home stayed at our place for a few days. In May, I heard through the grapevine of social media that they were to spend the summer in Chicago. After some conversation, we lined up a visit for your’s truly. Low and behold, my “summer vacation” was officially on.

At a week’s notice, I booked return flights for only $160. Delighted with life, I set off early on a Sunday morning.

In New York, transport links to airports are quite good. To LaGuardia, the links are perfect: I was able to transfer from the ‘E’ train to the Q70 bus which goes straight to the airport. As I was flying at dawn, I stocked up on caffeine and a lovely chicken panini while awaiting my flight.

Coming up to flight time, I received a delightful notification from the Delta Airlines app: I received a complimentary upgrade to premium economy. Now, this isn’t exactly first class, but it’s waaaay more comfortable than economy. The perks of my first flight as a Skymiles Rewards member!

Everything ran on time and, upon getting to O’Hare International Airport in Chicago, I had instructions ready for getting to Wrigleyville to meet the girls where they worked, Jostens Jewellery Shop at Wrigley Stadium, home of baseball’s Chicago Cubs.

After dropping my things, I headed for downtown while the girls worked for the afternoon. One point which I might as well make now: the trains in Chicago are SO much better than New York. Stations are cleaner, trains are always on time; it’s one of the most frictionless customer experiences I’ve ever had. Who knew I’d get nostalgic about a subway!

I strolled by the usual hotspots: the beautiful Chicago River, the crowded Millennium Park, and The Bean, an absolute marvel of architecture.

Upon return to Wrigleyville, that evening, I went to a sports bar to get a drink and chat with locals, including a very nice fella from Alabama who loves all things Ireland (go us).

My first day concluded with a night out in an Irish pub (of course!). The best was yet to come.

Considering our raging hangovers, our second day was impressively productive. I started the day with an iced coffee of course, but not just any iced coffee.

See, at certain subway stations you’ll find Dunkin’ Donuts that offer quite the proposition: between the hours of midday and 6pm, any sized iced coffee costs just 99 cent. To a coffee connoisseur like myself, that equals absolute heaven. Therefore, I made the most of it.

After a generous helping of the aforementioned coffee, we took a train out to a part of the city I had never heard of or seen. After being there, I am determined to live there or at least buy property there someday.

Its name is Roscoe Village, and it’s located in the northern side of Chicago. It reminded me very much of Newport, RI with its marvellous architecture, quaint boutiques, and a plethora of brunch restaurants and bars with outdoor gardens.

After a trip to a thrift shop (living the high life), we left Roscoe Village behind and headed for Oak Street Beach.

One of the best things about Chicago is its location right on Lake Michigan. This means you’ve got a city centre and multiple beaches side by side, creating spectacular views like the photo at the very top.

After chilling by the beach for a while, we went in the direction of downtown in time for sundown, mainly to catch a view of what many people recognise as Chicago in all its glory. 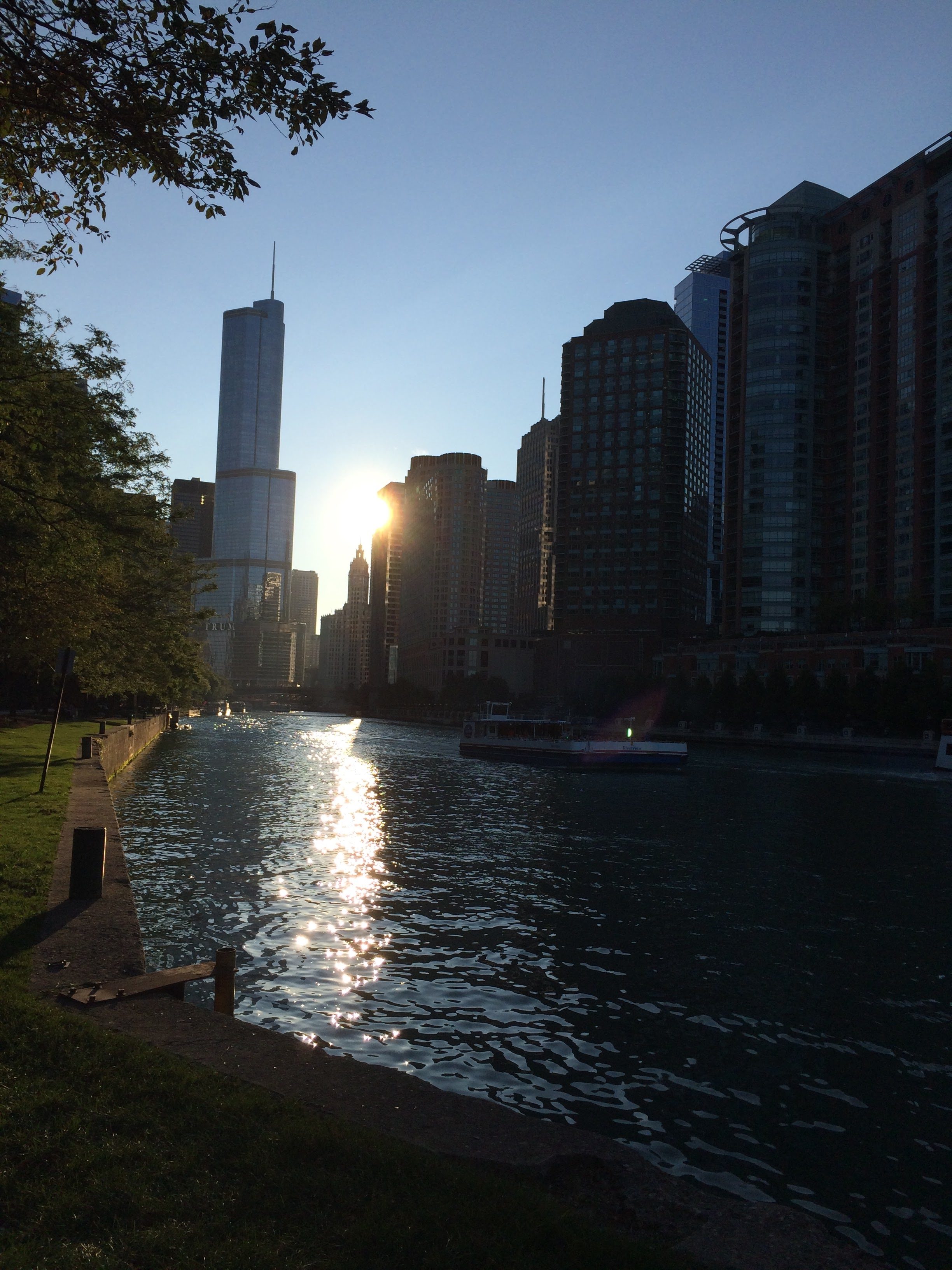 As you can tell, I really enjoyed Chicago’s photogenic nature. 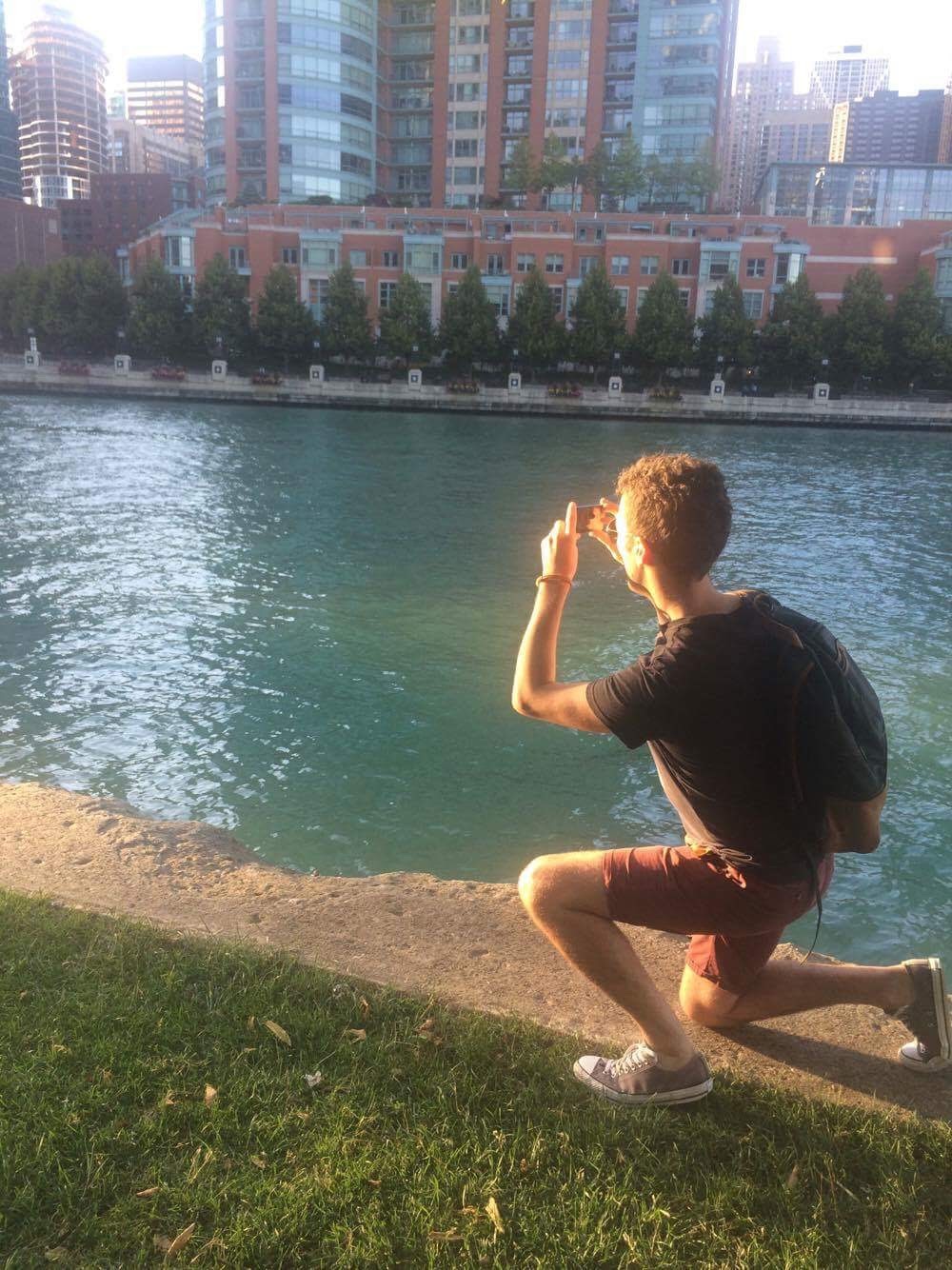 We concluded a successful day of touring by enjoying a “bag of cans with the lads” at Millennium Park, where a local musician was playing. Evidently, public drinking laws at Chicago’s parks are not quite as stringent as they are in New York. 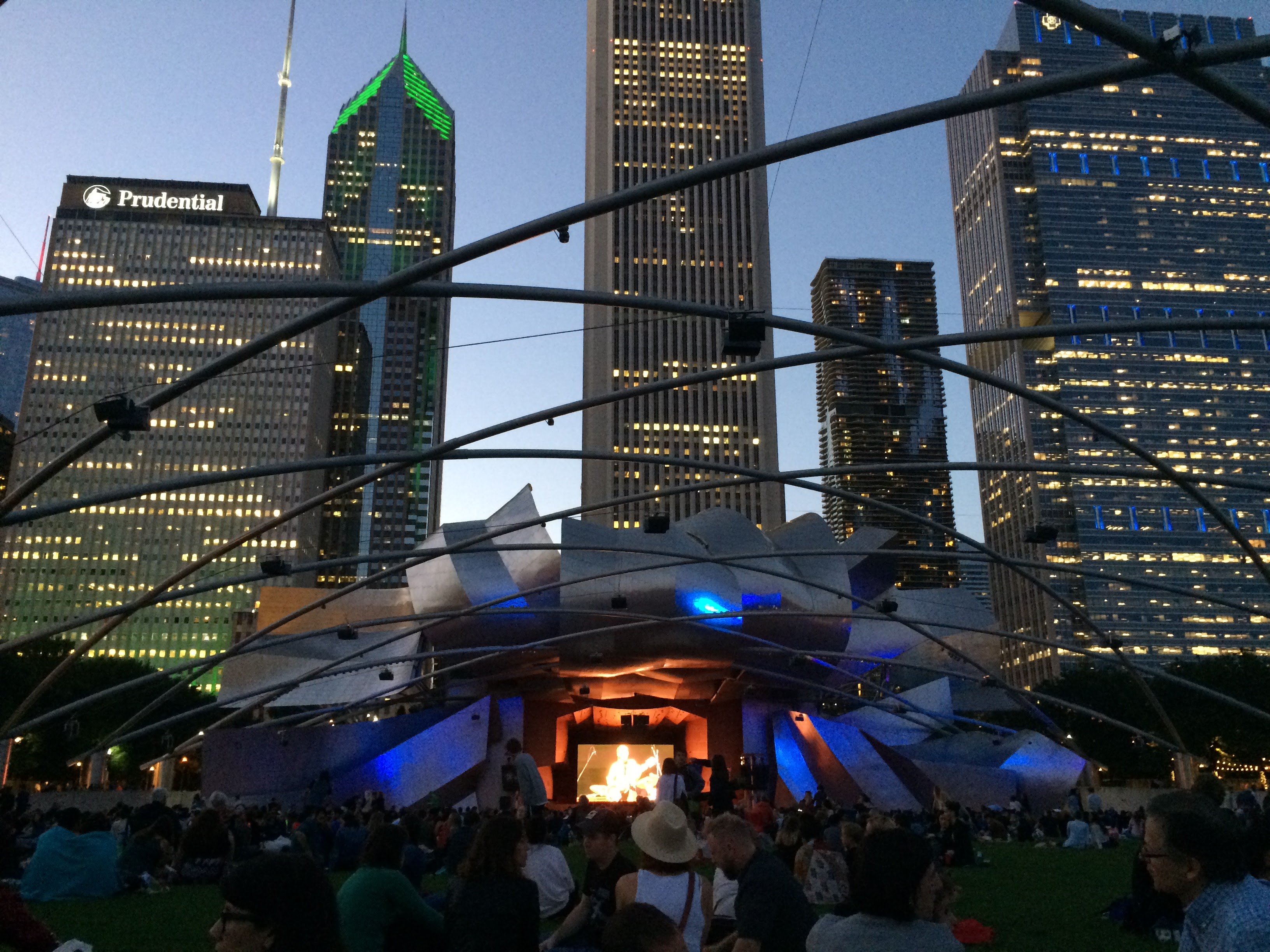 And so we go to day three. After a relaxing night, we decided to take a left of field option to start.

Shortly after, we decided to head back to the apartment in Wrigleyville to freshen up and psych up ahead of a busy evening.

That evening began with a quick trip to Chipotle for food which we then took to Millennium Park. This would prove the appetiser ahead of quite a main course, Willis Tower.

The Skydeck at Willis Tower really is a must-do for any visitors to Chicago. The views are absolutely phenomenal and, because we got there just in time for sundown, we were treated to an enhanced version. 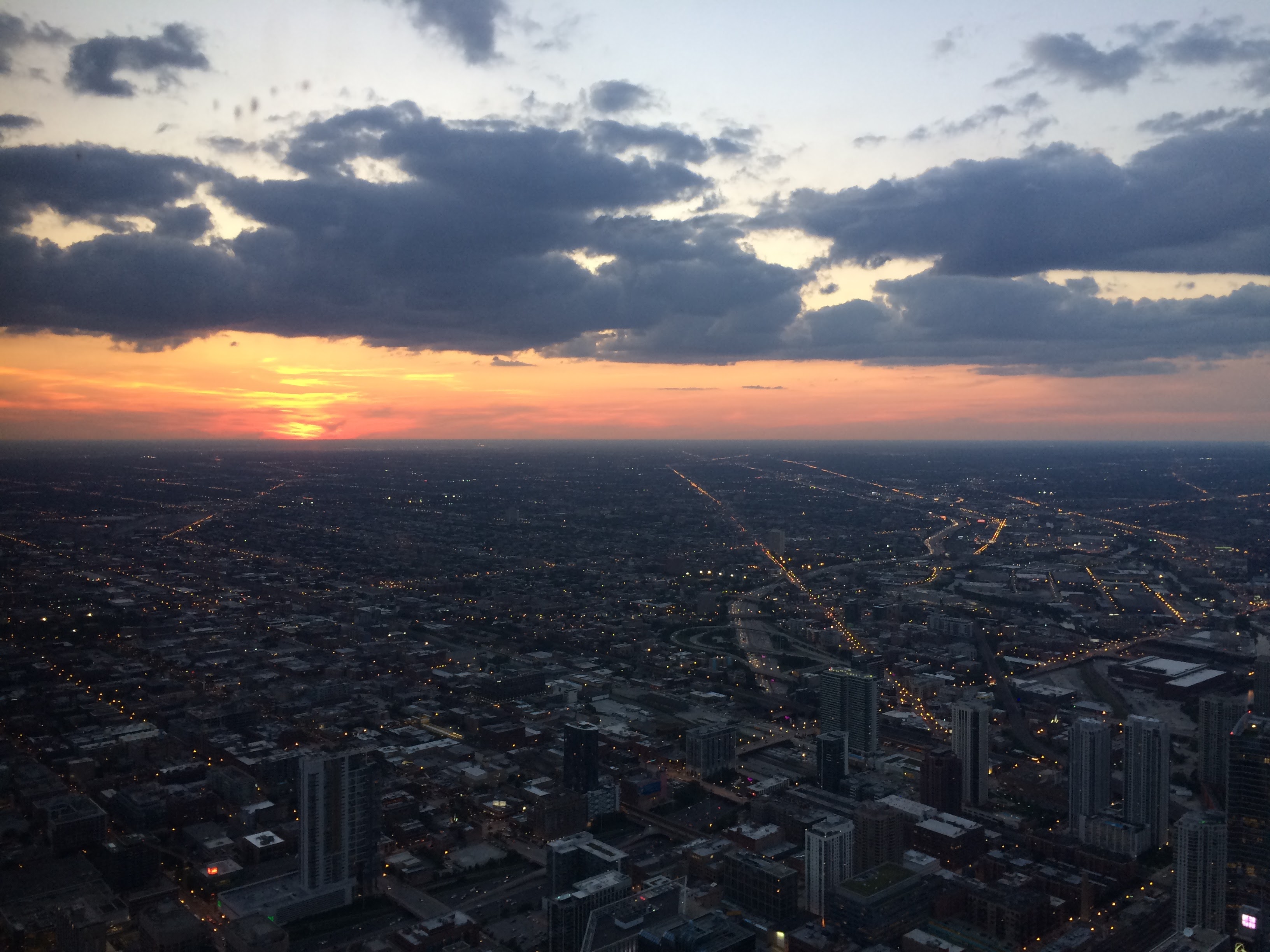 Day three concluded with a pregame at a huge apartment full of summer J1ers (I felt old), before a trip to Joe’s, the weekly destination for all summer J1ers.

My final afternoon in Chicago began with a couple hours lounging and chatting by the river, reflecting on what had been a hectic but successful few days. There was one more thing yet to accomplish though.

Everyone I had spoken to about Chicago before going there, told me I simply had to visit Giordano’s. Chicago is renowned for its deep dish pizza. And having already experienced the finest pizza imaginable in Rome, and New York’s famous offerings, I was eager to check it out.

The hype was sizeable indeed. Would it live up to that hype? Well, I had to wait to find out.

See, at Giordano’s (its Navy Pier establishment anyway), the crowds are huge. Because deep dish pizza takes some time to be prepared, we were encouraged to pre-order our meal. This meant ordering, then waiting around 45 minutes before actually taking our seats at the restaurant.

After another 20 minutes or so, this remarkable sight greeted us. 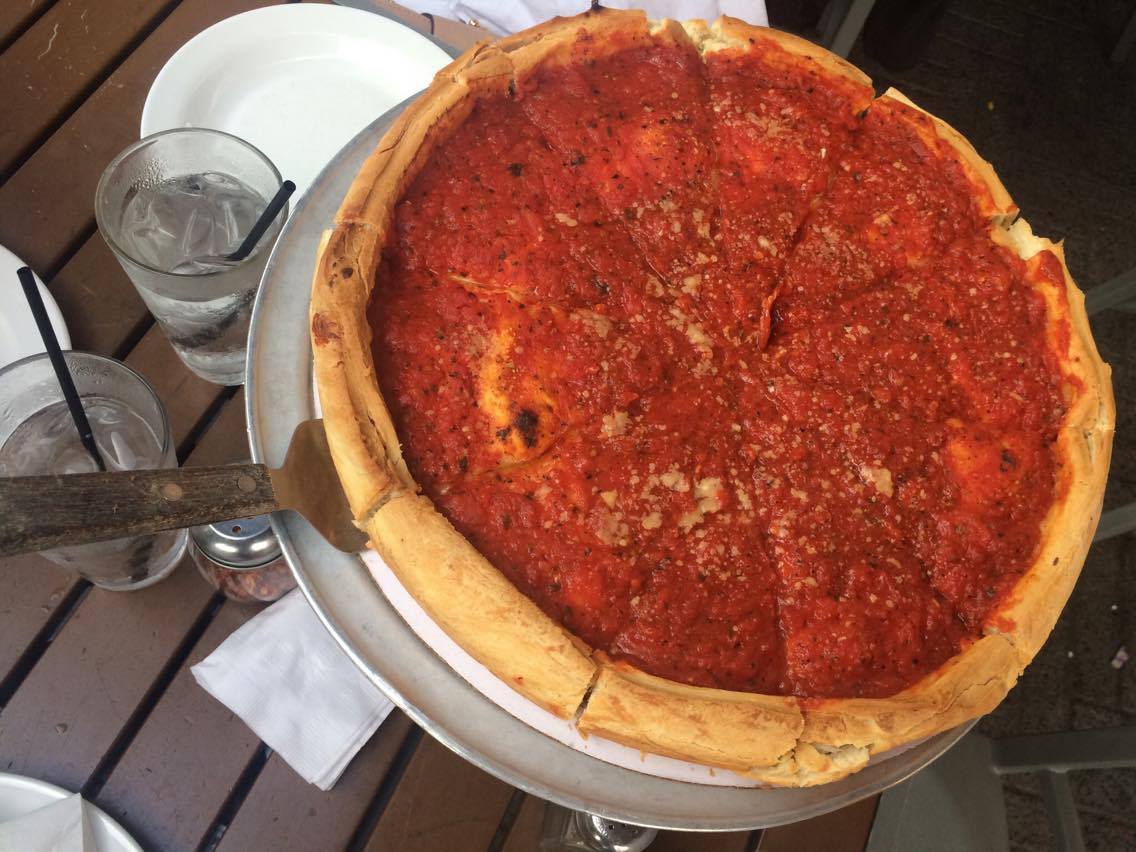 Filled with pepperoni, peppers, and lots of cheese, it was a sight to behold. I can only really compare it to a kind of quiche. It was unlike any pizza I had had before, and it was incredible. The girls had one half, and I had the other half. Yes, I was that hungry.

As you can imagine, I was on the cusp of having to be wheeled out of the restaurant. Luckily, this was not the case so, after leaving heaven behind, we made our way down Navy Pier to grab coffee to wash it all down.

During summer in Chicago, Wednesday and Saturday night fireworks displays are held at the pier. This understandably draws even greater crowds to an already-crowded area.

I quipped to the girls about how nice it was of the city to hold a fireworks display for my last night. All jokes aside, it was the perfect end to a wonderful stay. 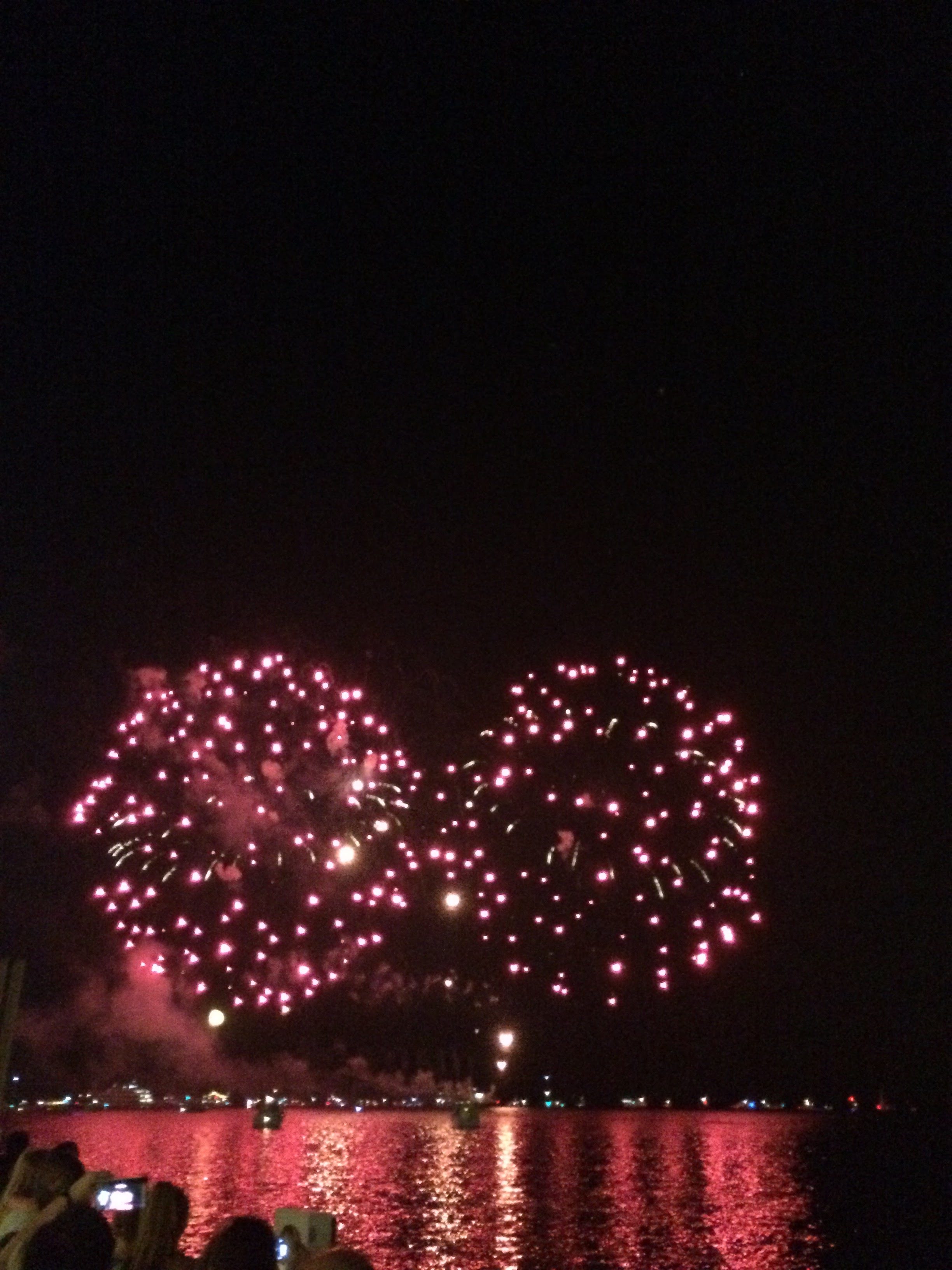 Upon returning to the apartment, I caught a few hours sleep before taking a Lyft to the airport. Apparently you stand a good chance of being mugged on the quiet early morning subways out of the city. Therefore, I was not going to take that risk.

After getting to O’Hare nice and early, I enjoyed some food and coffee, and reflected on what had been a highly fruitful trip.

My Facebook album full of photos barely does Chicago justice. It’s the furthest west I’ve been in the United States thus far, but it was absolutely worth the trip.

A great city with plenty to see and do, I’m already pondering when I’ll visit it again. Chicago didn’t quite live up to its Windy City reputation as the weather was splendid; however, life is definitely breezy there.

Washington Heights vs. Woodside: The Pros & Cons of Living in Different Areas of New York City