Beatriz: My experience working abroad during the Covid-19
Visit Cork: top things to do
Co-living in Dublin: the new accommodation sharing trend
How to create the perfect CV & Cover...
Planning your trip to New York
A Travel Guide to Ireland’s Alternative Activities
How Study Abroad in Spain Inspired My Wanderlust
4 Apps You’ll Need to Survive a Year...
Top 4 Culture Shocks in moving to France.
The Best Ice Cream Places to Visit in...
Home #AdventureThatIsLife Let’s Get Lost In Chicago! – Free Time Trip For An Au Pair in USA
#AdventureThatIsLifeAu PairExploreLive Abroad

Let’s Get Lost In Chicago! – Free Time Trip For An Au Pair in USA 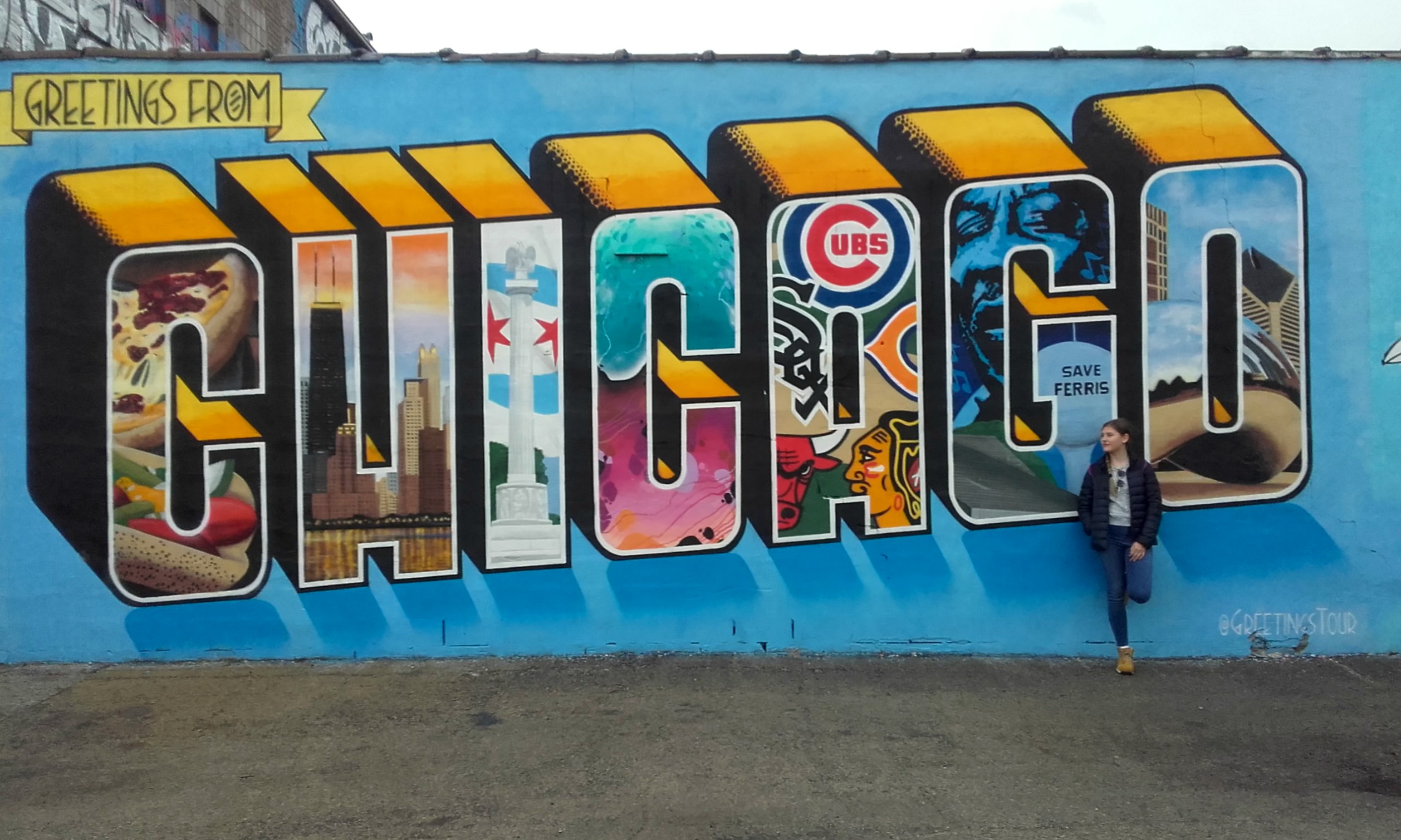 Advice about what places to see, how to move around and where to stay according to the budget of an Au pair.

Chicago, the “windy city”, home of Jazz and Blues music and one of the points of reference of the entire American Economy (second financial center in the country), is definitely a place which deserves a visit. From some of the tallest skyscrapers in the world to the quiet promenade along the lakefront, you don’t feel you are in a metropolis. Unlike New York, it is more quiet and has a good traffic flow but the cost of the life is equal. Everything is concentrated around the center, “The Loop”:  shops, parks, most famous buildings, restaurants, offices, hotels and so on, while in the suburbs we have the residential areas.

My first impression of Chicago was exactly how I expected it was: WOW!. I fell in love with this city at first sight. Here my adventure:

I left New York on Saturday April 8th at 5.30 pm by bus. I know what you think now: why  the bus?! Unfortunately for that period (Spring break), flight tickets were very expensive for a round-trip, so I decided to take the bus to go there and the plane to come back since I could find a good deal for the return (fortunately!). It took me 18 hours to arrive at my final destination, Chicago obviously. Crazy, right? After 10 hours travelling, I had to change the bus in Cleveland (Ohio) because mine was directed to Detroit (Michigan) and then 8 more hours. I arrived in Chicago on Sunday April 9th at 10.30 am. I let you imagine how my legs were in pain.

After being dropped from the bus, I headed to my hostel which was located in the north side of the city. To get there, I bought the Ventra Card Pass (3 days in my case) at the machine of the railway line. With that, you can use all the transportations in the city all the times you want. It is very convenient (25$ only compared to 3$ for each ride) and comfortable.

Once in the hostel, I did the check-in and left my bags in my room to start immediately my new adventure (also to stretch my legs). I started to walk to Lincoln Park (about 15 minutes from the hostel) where the promenade of the lakefront was located. For who doesn’t know it’s the Lake Michigan, so big which looks like a sea.

As it was the first day, I limited my exploration to a part of the lakefront (from Lincoln Park to North Avenue Beach), Millenium Park, where the famous “Bean” is placed (in reality the name is “Cloud Gate”) and Willis Tower, well known as the “SkyDeck” for its famous glass balconies.

A good advice to save money for the main attractions is to buy the City Pass  online. Thanks to it, I visited two of the most famous city attractions: Willis Tower and the John Hancock Tower, known for the magnificent 360° view. There are more interesting things to see of course but it depends on your time, budget and, for some, the weather as well. Just to mention a couple of them, the Art Institute is really good and the architectural cruise along the Chicago River is one of the best tours because it explains the story of the different buildings.

Coming back to my travel schedule, the third day was pretty relaxing due to a storm. In the morning, I went to see the famous Route 66 sign, close to Millenium Park, and I visited one of the most famous graffiti areas: California Station before it started to rain. After that, I went to a restaurant close to my hostel for lunch and since I was tired from the trip with the bus and the sky was very cloudy that it could rain in seconds, I decided I would have spent this day in my room resting for the next couple of hours. 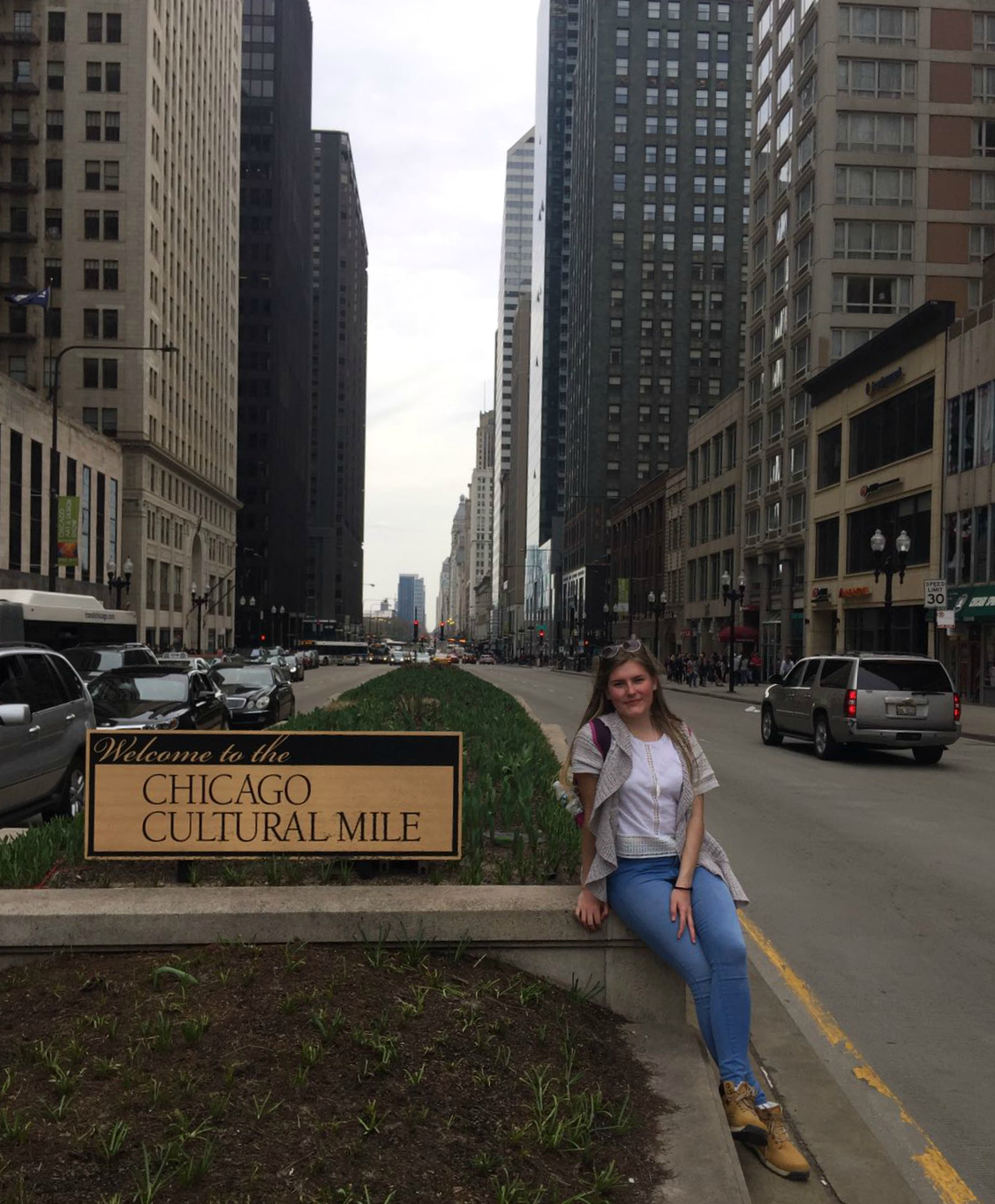 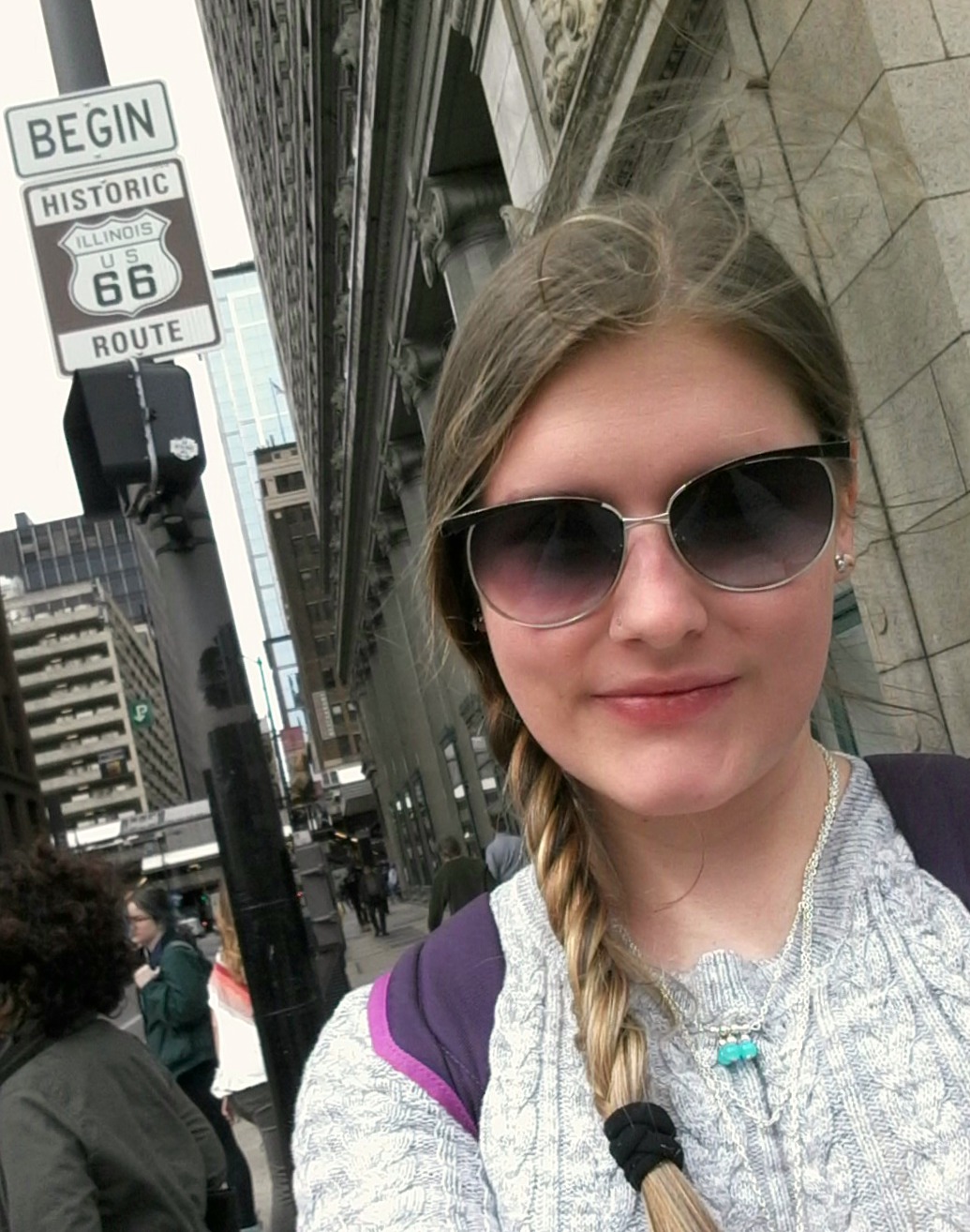 The fourth day, with all my energies back, I came back to the center and walked along the riverwalk. After that, I marched around the famous Magnificient Mile, a district with a lot of shops and hotels, and bought some souvenirs. Close to it, there is one of the most photographed spots, the Chicago Theater (it’s better to see it when it’s dark). In the afternoon, I took the bus in direction to Adler Planetarium which has one of the most beautiful views of the city. I really advise you to go there for a great skyline and view of the lake.

On my way to the hostel, I saw a weird monument along the street so I stopped by to give a look. It was a representation of headless and armless iron sculptures at the end of Grand Park, called Agora sculptures, which apparently represents the democracy. It was pretty cool. Always in Grant Park, there is Buckingham Fountain, one of the largest fountains in the world and one of Chicago’s landmarks. Unfortunately, when I was there, it was off (I guess they turn it on only in summer).

My last day, before to go to the airport, was the most beautiful: it was warm and sunny and I had a lot of fun. I woke up early in the morning and I walked all along the lakefront for a last view of the city. I can definitely say the lakefront is my favourite place in Chicago. It gives you a sensation of peace and well-being. Always keep going southwards, I visited the John Hancock Tower, as I mentioned before, and I continued my walk stopping by the Navy Pier with his panoramic wheel. 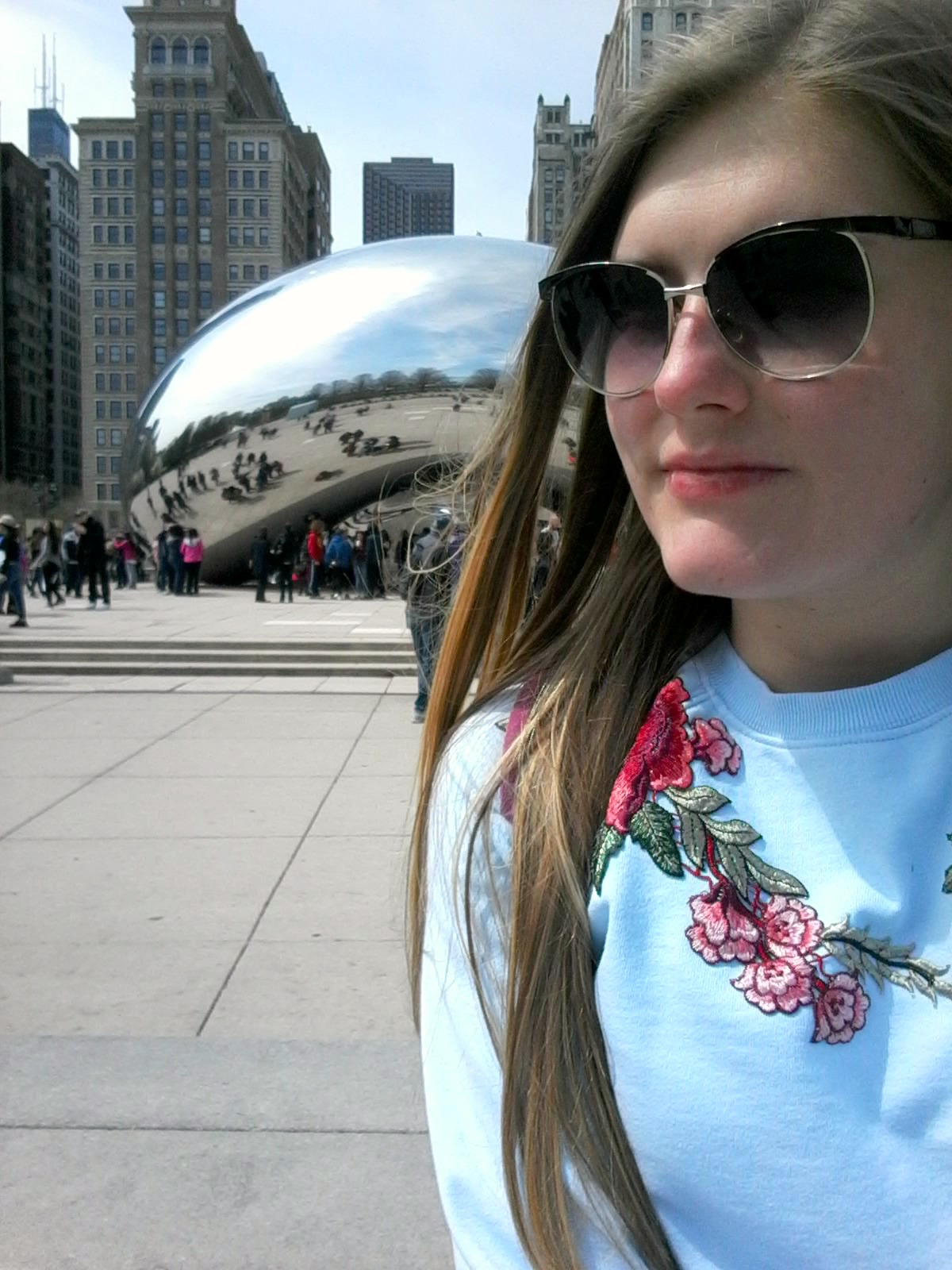 Finally, I end up in Millenium park again to see for the last time the “Bean”. I think there is no better way to say goodbye to Chicago than seeing the “Bean” for another time. With that, my trip arrived at the end: Chicago is really worth it and if you have the chance to travel, go there and you won’t regret it. I was sad coming back to New York because I enjoyed every single moment, even if it was just me. Now, I am charged more than ever and I can’t wait to embark on a new adventure and share it with you.

I am Monika, 21 years old, from Venice (Italy). Travelling is my biggest passion and dream. I've always daydreamed in my room to be in some place in the world. Thanks to my mum, I could live some experiences abroad. In Poland (it's my mother's birth place so that's why Poland), then in Ireland for a year studying English and working as Au Pair and finally here in the United States for a year as Au Pair. It's a dream which becomes true. I really love seeing new places, new people and different lifestyles. I am also passionate about photography, walking in nature and cooking. When I have some free time, I like meeting some friends and explore together the City or shopping. The reason why I started to write a blog is because I would like to share with everybody my experience and be useful for who would like to try new adventures =)

Meet our Team! Jessica, the Accounts Intern who is always eager to get to know different cultures

Get to know the community on a deeper level! Benefits of learning English in small places