Beatriz: My experience working abroad during the Covid-19
Visit Cork: top things to do
Co-living in Dublin: the new accommodation sharing trend
How to create the perfect CV & Cover...
Planning your trip to New York
A Travel Guide to Ireland’s Alternative Activities
How Study Abroad in Spain Inspired My Wanderlust
4 Apps You’ll Need to Survive a Year...
Top 4 Culture Shocks in moving to France.
The Best Ice Cream Places to Visit in...
Home #AdventureThatIsLife Stories Behind The Photos – Valencia
#AdventureThatIsLifeExploreLive Abroad

Stories Behind The Photos – Valencia

It’s why awards like the Pulitzer Prize are so highly regarded: such powerful photos affect people in ways that words cannot describe.

I’ve taken well over 5,000 photos in the past three years, namely because I’ve had some incredible experiences in that time.

Kicking things off is a wonderful city, Valencia. Here are the stories behind the photos. 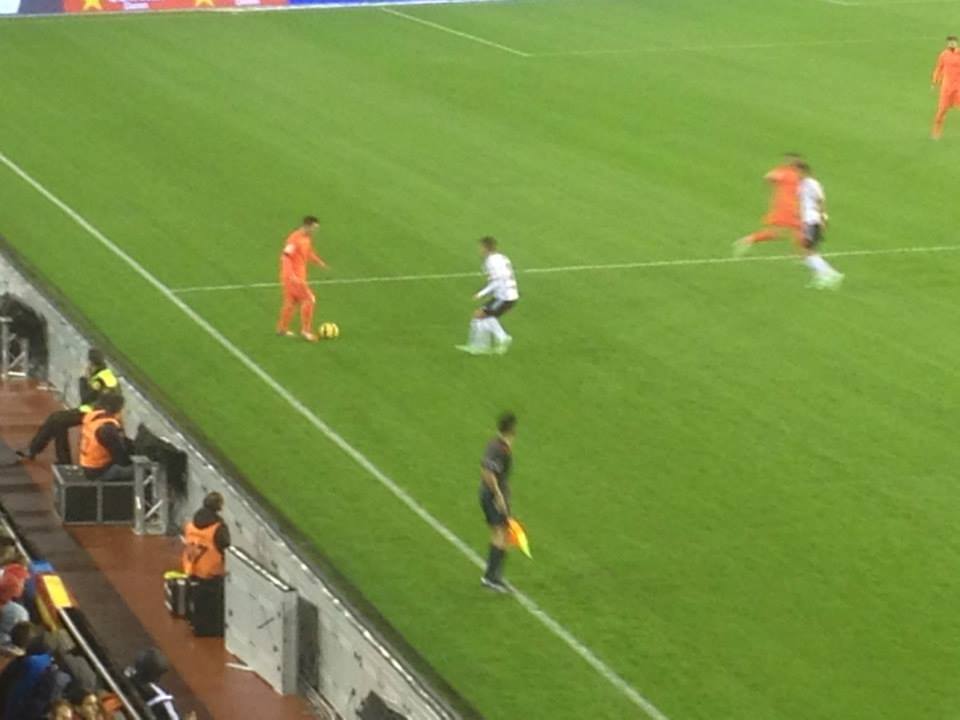 30 November 2014. La Liga. Mestalla Stadium. Valencia vs Barcelona. Having lost their Spanish crown to Atletico Madrid the previous season, Messi and co were under pressure to deliver.

The now-historic triumvirate of Messi, Suárez and Neymar was still finding its feet. In this game, Valencia didn’t give them the chance. They were dogged, energetic, and hugely impressive.

Despite Messi being relatively off-colour that night, it’s still Messi. So imagine what’s going through the Valencia player’s mind: “Oh my god, I’m facing up to Messi. Do I stick or twist? Dive in or stand my ground?” Lots of players ask themselves that very question, because you never know what Messi will do. 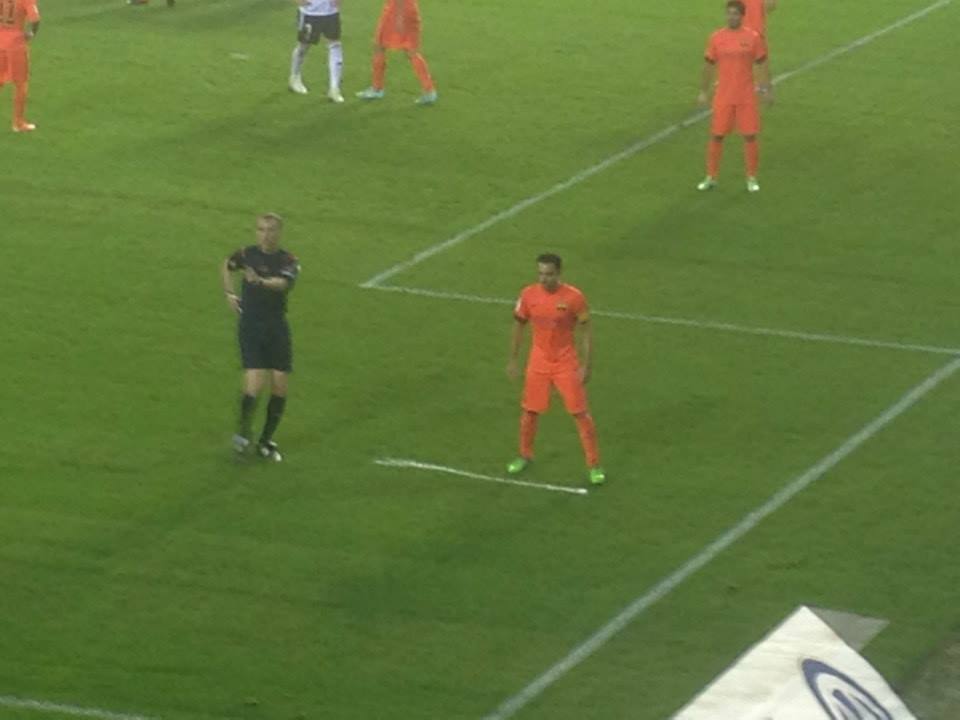 This photo encapsulates just how sensational my view of the game was. I barely had to zoom in when the referee used his revolutionary vanishing spray to make sure that Xavi did not encroach on the Valencia free kick.

At this time I was not to know that Xavi would enjoy the riches of winning a Treble before leaving at the end of the season. 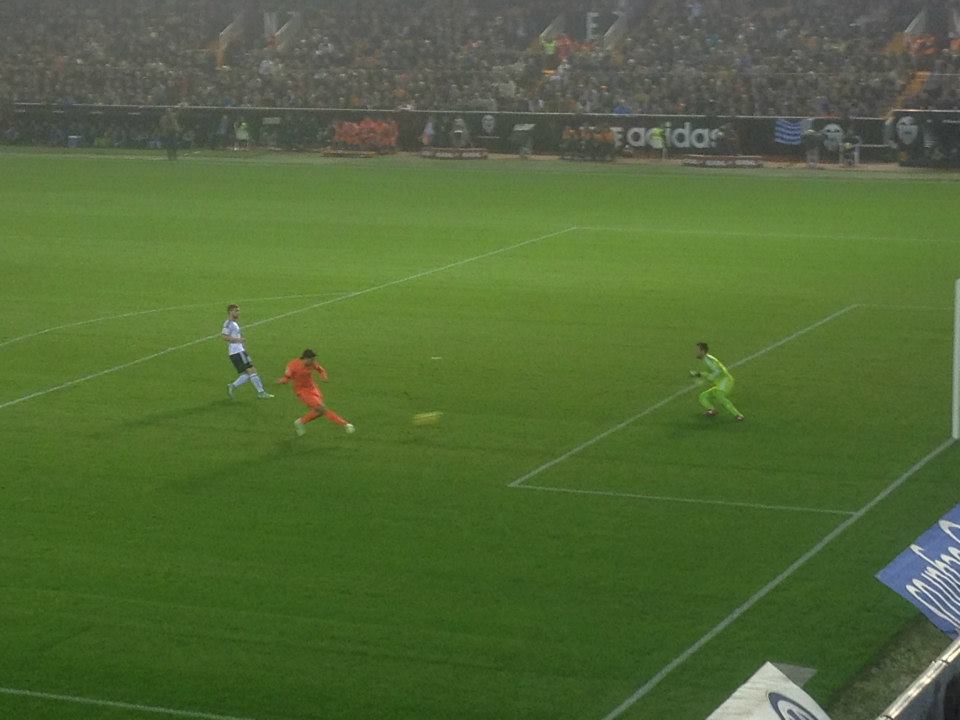 And for my favourite photo from the game. It looks like I well and truly got the money shot. Luis Suárez through on goal with only the keeper to beat. It looks like a dramatic game-winning moment. If only that were the case.

You may be able to tell by the relative calm of the Valencia defender that an offside has actually been called. The shot would end up hitting the keeper who then resumed play.

If only things were as dramatic as they seem.

The ending to the game ended up being quite dramatic, however, with midfield maestro Sergio Busquets popping up with a last-minute winner for Barça. Indeed, what a game it was. 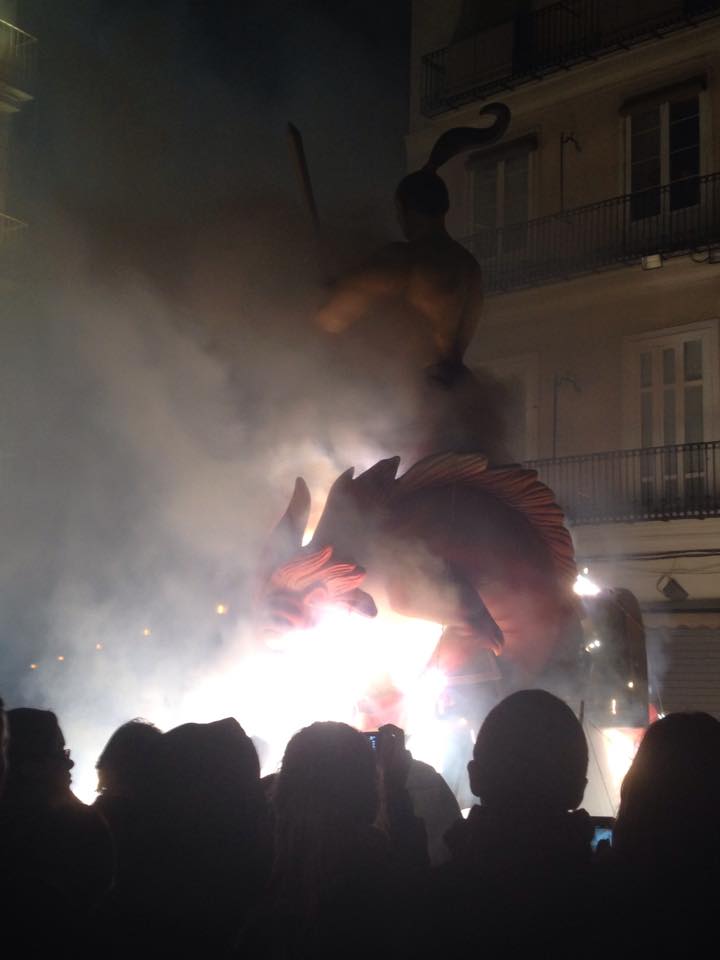 Las Fallas, one of Spain’s largest national festivals. It takes months to produce these elaborate figures of paper and wax, wood and polystyrene foam. And during this festival, impressive fallas like the one above are burned to the ground, at a cost I cannot imagine.

One of the real eye-openers of studying abroad in Spain was being exposed to such tradition. In Ireland we don’t really have anything comparable. In fact, it would probably be viewed as outlandish or left of field. However, in Spain, it simply seemed really frickin’ cool. 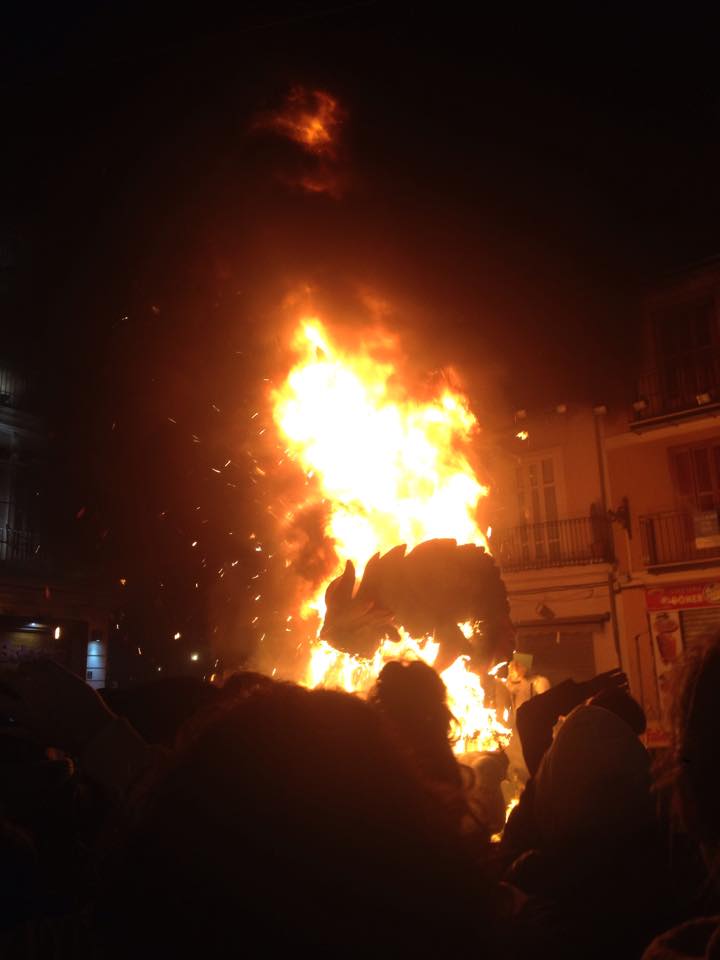 When all was said and done, when the dust settled, we were left to marvel at what is a truly glorious city. March 2015 was my last time in Valencia, but it definitely won’t be my last.

It’s all about the cultural aspects when studying abroad!