Beatriz: My experience working abroad during the Covid-19
Visit Cork: top things to do
Co-living in Dublin: the new accommodation sharing trend
How to create the perfect CV & Cover...
Planning your trip to New York
A Travel Guide to Ireland’s Alternative Activities
How Study Abroad in Spain Inspired My Wanderlust
4 Apps You’ll Need to Survive a Year...
Top 4 Culture Shocks in moving to France.
The Best Ice Cream Places to Visit in...
Home #AdventureThatIsLife A Filipino-American and a Spanish-Galician. What I learned about communicating from my multilingual relationship
#AdventureThatIsLifeLove

A Filipino-American and a Spanish-Galician. What I learned about communicating from my multilingual relationship 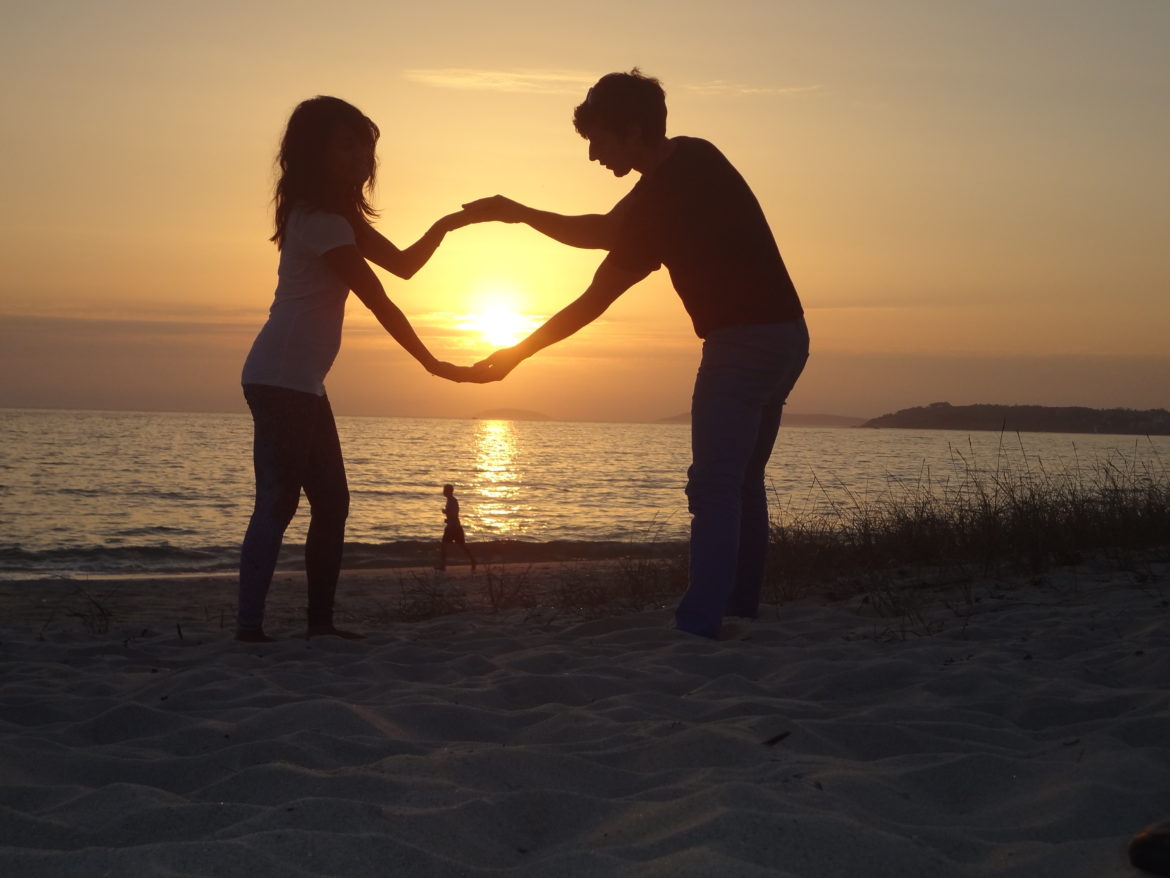 Communicating within a relationship is difficult, whether it’s with your mum or your boss or your significant other. It gets to be even more so when the two people involved are literally speaking two different languages.

My partner and I come from four cultural and linguistic backgrounds. I’m Filipino-American, born in America by Filipino parents. I speak English and while I’m not fluent in Tagalog, there are some words my mum used growing up to describe things that, in my mind, just fit better and so occasionally I use them.

My partner is Spanish, but from Galicia, an area of Spain where they speak a local language and work heavily to preserve their culture. Because his first languages are both Galician and Spanish, his vernacular consists of many phrases I don’t understand without explanation.

So, when my partner and I are discussing things, even the simplest ones like how our days went, we often have to look beyond the words we’re using. We use mostly Spanish and English to get through our conversations, but we often have to stop and explain the words the other is not familiar with, especially if they’re in Galician or Tagalog.

It’s challenging trying to communicate everything you want to someone you love. It’s even more challenging when you have to do it all day, every day, in a second language, but doing it has taught me a great deal. Here’s some of what I’ve learned (and work to keep learning) along the way:

It’s not about the words you use.

I often read in American psychology magazines that to communicate certain things like feelings or how you view a situation in a relationship, you should begin with the phrase “I feel like.” “I feel like I do most of the cleaning,” for example. While I don’t dispute this and while it has worked well in my relationships with other Americans, I’ve yet to find the “I feel like” equivalent in Spanish or Galician (if anyone has a translation that I can use, feel free to share it!).

What I’ve found works better for my relationship is the tone I’m using and the energy I’m placing behind the words. If I want to communicate something like I feel like you’re always late, I wouldn’t say those words exactly. Saying the words directly is, well, too direct. It’s abrasive. It can communicate critique rather than how I feel. So I change the energy behind the phrase. I make it a little more light-hearted by saying it with a smile or by making a joke out of it.

This has worked for us, and now his being late is our inside joke and I don’t get so upset about it anymore.

Because communicating with a partner in a bilingual or multilingual relationship isn’t about the words I’m using, I’ve learned to choose the words I do use carefully. If I have something I want him to understand, I use his language so that he feels it more fully, as opposed to English where there might be some separation from what I’m trying to communicate. (For example, I always say “I love you,” so I feel it more strongly, and then “Te quiero” so he feels it, too.)

If I have a complaint, however, I always check if it’s something that’s worth translating or learning how to say. I feel like you’re always late, for example, in my view, wasn’t worth translating, so I figured out a way to communicate it a different way. 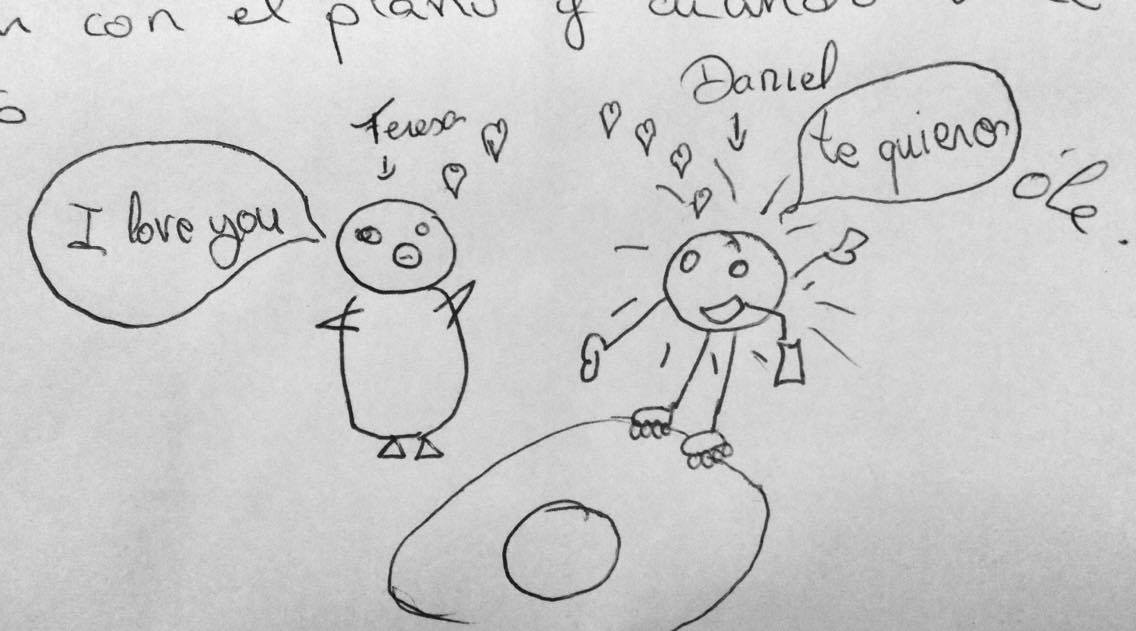 A drawing from a love note my partner gave me before I left for a trip back to the United States.

When my partner and I need to vent about our jobs, our days, our lives, we do it in our first languages. That is, I do it in English and he does it in Spanish. Thanks to him (and a whole lot of classes and effort on my part), I now have an intermediate level of Spanish. Needless to say, my intermediate Spanish doesn’t allow me to understand every single word he’s saying, especially if he’s saying it at rapid-fire speed.

Instead, I read his energy. I listen to his tone. When someone vents, they are obviously frustrated. They aren’t looking for their partner to solve their problems, they need them to listen.

So when my partner vents, usually about the same things, I use context clues. What has he told me about this before? What are the phrases he’s using that I already know? I use this information, combine it with his energy and tone, and then instead of replying with a solution, I simply reply, “Te comprendo, mi amor.” “I understand, my love.”

I’ve learned not to occupy my mind with whatever it is I want to say next. My mind needs to be occupied with what he wants to communicate with me because when we’re venting what we’re really saying is Life is frustrating and I need you to share the burden for a minute.

There is no winning in a relationship.

I learned then, that there was no winning, that neither of us was getting anywhere by arguing, that one of us had to concede and that’s okay. It’s okay because we’re partners. We’re in it together. So instead of arguing and wanting to win, I listened. We spoke a little softer. We eased into what we needed to say, and we began to understand each other that much more.

Patience is a virtue for a reason. My relationship wouldn’t have gotten this far without it. Exhibit patience, that one heartbeat of a moment where you consider what comes next, and you’ll find understanding and even more love on the other side.

Meet our Team! Maria, the Intern who loves the culture and the good vibes of Dublin.

International Love in London. I recommended a good wine and now we’re getting married!